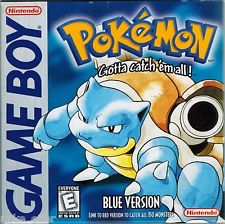 As part of the 20th Anniversary of Pokemon, Nintendo has re-released the original games – Pokemon Blue, Pokemon Red, and Pokemon Yellow on the 3DS eShop. I’m a huge Pokemon fan, so I was pretty geeked out, but a little worried about how the game would play after all the quality-of-life improvements from subsequent generations.  While I agonized over which version to purchase, I eventually succumbed to nostalgia and picked up Pokemon Blue, the version my middle schooler self played.  I have to say, I’m surprised at how well the game has held up over the years.

END_OF_DOCUMENT_TOKEN_TO_BE_REPLACED

This is all the information I have, but I’m still ridiculously excited for this.  We’ll find out more on the Nintendo Direct on Friday, February 26th 2016.

I’m ridiculously geeked for the new Pokemon games — and now literal pokemon mounts?! Multiple Pokedex’s in just one game?!  The collection addict in my just squee’d and wet itself a little bit.  Catch the video from the Escapist below.  The rideable pokemon featured is “GoGoat” cause it’s a goat …. that goes (as they so eloquently say in the video :-)).  Also, it makes me hungry for yogurt.

So is it October yet?  It really should be…

Anyway, check it out below.

So I picked up Pokemon Conquest on Friday (since I actually managed to find it.)  I had stopped 4-5 other places throughout the week without success to pick it up (along with Theatrhythm, but thats for another day).   Anyway, I started playing the game and I’m probably 3-4 hours in–it’s actually pretty fun, though a little bit shallow at this point in the game — I’m not sure if the gameplay will deepen a bit more as time goes on.

From a pokemon perspective, it’s very much like pokemon lite — not all 600+ pokemon are in the game, instead only a subset of 100 or so.  As you battle other warriors and warlords and wild pokemon, you add their pokemon to your “Gallery,” which is loosely synonymous with the pokedex.

As far as strategy goes, it’s pretty standard far with how pokemon games with the pokemon types being more/less effective against other types.  In the beginning of the game at least, Pokemon Conquest goes out its way to make this easy for you to see.  The first couple kingdoms you conquer all play into this strategy to help drive the point home.

Overall, thus far into the game — it’s pretty fun. At this point, it’s not horribly complicated and the strategy at this point isn’t all that deep, but at only 4 hours in, that could easily change down the line.  At the very least, it’s a good addition to the Pokemon Universe.