Blizzard recently made a bit of an embarrassing mistake– Mei, a curvaceous Overwatch character was significantly skinnier in her new skins than she had been in previous iterations.  Blizzard has already come out and said that that it was a bug and unintended and would be fixed in an upcoming patch. But of course that hasn’t stopped people from both sides of the proverbial fence from jumping up and down from how could Blizzard do this, to Blizzard is caving to the special snowflakes.

I recently had a conversation on another site where a commenter decried the idea that gamers would identify with Mei (or really any video game character) as a positive role model. Some people were upset about the fact that

The discussion had snarky comments about what really matters in gaming, with the strong implication that this particular issue didn’t matter and others arguing as to why this was important. It was a good, if exhausting conversation. But contrary to some of the discussion that I had, the portrayal of Mei does a lot for the game, the genre and the medium as a whole. Mei matters, and she matters a lot. She matters because people say she matters. 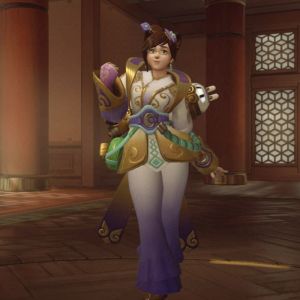 Any time you try to have a discussion about the critical study of games, you inevitably get a litany of “it’s just a game, you are way over thinking it,”  responses. Well,  there’s a fairly significant body of work that suggests that games do matter as a critical medium. A game, like most media, is never just a game.

On example of this is in what we consider our self.  In my graduate work, I work my thesis on how the definition of self shifts during gameplay, especially when you are playing with multiple characters.  I use the example of when playing your priest, you refer to yourself as ‘I’ frequently, whereas you refer to Paladin as apart from you, “My Pally”. But that definition of self changes whenever you log into the character –your pally becomes part of your understanding of yourself, while the priest is now not. You refer to your pally as “I” and your priest as apart from you, “my priest.”

This results in some pretty complex identity shifting. This dynamic shows that our sense of self is wrapped up in our pixels — whether we want to admit it or not. While the game is a game, it’s never JUST a game and representation in the game matters.

Outside of the logical leap here that it takes to get from “it’s just a game and nothing matters,” to “only gameplay matters,” this argument is demonstrably untrue as well. Think of Mei as she is now. Then, think of Mei as if she were a blue dot on the screen.  She has all the same gameplay, all the same mechanics, she is just a blue dot. Does the statement still stand that how she looks doesn’t matter? How many people would play Overwatch if all the characters were replaced with various colored dots? Would the game be as engaging or successful as it is now?

No, it wouldn’t. Overwatch with colorful dots instead of characters would not have the same success that it does now.  So it logically stands true that because we know that representation matters at some level within games, that it’s possible for less drastic forms of representation to matter as well, such as a waist size.

Put another way, imagine Roadhog in Overwatch had the body type of a gnome. Everything else about him in the game – functionally and gameplay wise, is exactly the same, but he looks small and weak. I think it’s unreasonable to expect that people would play him the same way, or relate to him the same was as they do now.

She’s not real, so she doesn’t matter

As a culture, we have the pre-disposition towards the meatspace when it comes to value and meaning. It’s common to hear arguments against anything virtual having any value or being appropriate for role models. In the eyes of the enlightened, only the meatspace can hold value and anything that’s virtual is inherently value-less. There’s really no demonstrable reason for this particular perspective, outside of a bias for meatspace. To hear proponents of this perspective tell it, the people who DO find value or meaning in virtue things are mentally ill.  They would say there’s something wrong with someone who looks up to Mei as a role model.

Unfortunately, I don’t have a good philosophical way to overcome this one, other than to point out the enlightenment isn’t necessarily objectively true as we are raised to believe, but that’s generally a hard pill to swallow. Perhaps relying on the old adage, “Different strokes for different folks.” Unfortunately, when the opposing perspective takes the stance of “anyone who disagrees with me is mentally ill,” every argument falls flat for them.

Basically, Mei and how she looks matters at the most base form because people have decided it matters to them. Arguments like “it’s just a game” or “it doesn’t change gameplay so doesn’t bear talking about, or the ever fruitful “she’s not real, so it doesn’t matter” all fall flat in the face of one simple statement–It doesn’t matter if it matters to you, it matters to someone.